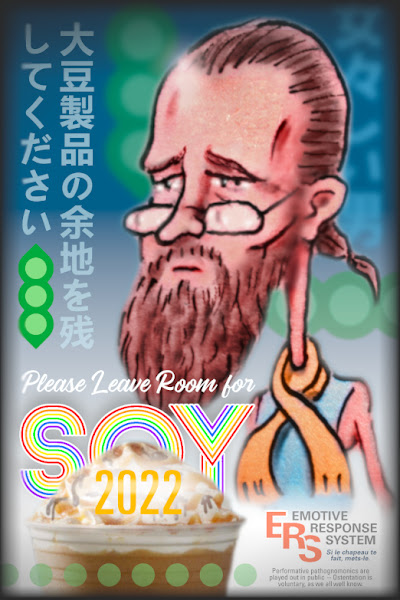 Though they edge close to certain cardinal vices, pretensions of delicacy are nothing new.
Certainly in ye olde publick houses of yesteryear powdered wig fops were pompously sprinkling faerie dust into their fortified wine. And no doubt in the far future some unitard-clad spacefarer will be making a grand show of taking his protein pill with a haughty air. We’re talking human nature here. Timeless and universal, at least until we further evolve (or de-evolve).
So current stereotypes and physiognomies are less important when it is actually performative pathognomonics that are played out in public everyday. Ostentation is voluntary, as we all well know.
Si le chapeau te fait, mets-le.
Posted by LordSomber at 9:20 PM No comments:

“The Doggyblahs” — Fact or Fiction? 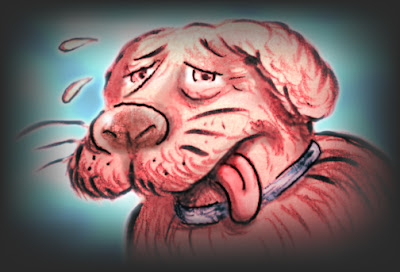 Cacophany! The blitz and rumble of Mother Nature’s wrath in conjunction with man’s technical know-how in amplifying music to jet engine levels. It's enough of an earful for mere humans, but how do our four-legged friends deal with assaults on the senses, both natural and unnatural?

Flashback: Stratum V
“The Doggyblahs — What is it?” postulated Captain Smitt as he paced the front of the classroom. The cadets reflected on this creative writing assignment. A fictional canine malady? What could a dog possibly have ‘the blahs’ about?
Anthropomorphisation Alert*: Do dogs suffer from depression? Yes, but not the existential ennui internalised by bed-wetting humans of the 21st Century. If a dog is down in the dumps, dammit, the source is external to the hound himself.

Back to the present:
The dog days [ahem] of summer are here, so that means it’s time for ClassicCityFest. It’s a local celebration of arts and music, but more importantly, it’s an opportunity for all stripes of narcissistic egos dependent on pet props to drag their furry friends to be part of a public spectacle. From Suicide Girl rejects with pink-dyed poodles to overweight gray ponytails with their pittie mix complete with sunnies and dusty bandana, Classic City’s animal owners will proudly be out in force.
At ClassicCityFest, dogs will relish the opportunity to:
• Enjoy the sensation of molten asphalt scorching their tender paws under the 105°F sun.
• Appreciate the 110-decibel musical stylings of tone-deaf local bands.
• Marvel at the majesty of Earth Mother Gaia as she unleashes the inevitable mid-summer thunderstorms (Cuz dogs luv thunder, amirite?).
Always thinking ahead, local pet owners are optimistic that the positive experiences of ClassicCityFest will condition their dogs to enjoy the upcoming July 4th fireworks celebrations as well. 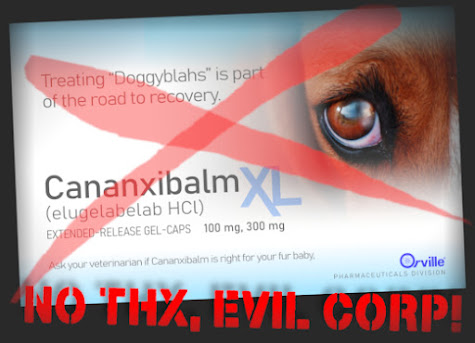 *At one point, cooler heads attempted to prevail when Orville Pharmaceuticals came forward with a prototype drug to treat this so-called “Doggyblahs.” (The pathology was never formally acknowledged by the medical establishment.)
But the pharma giant halted research when they realised the ‘ailment’ was just a negative response to external stimuli rather than an internal psychosomatic conflict. Plus, outcry from progressive circles heavily criticised Orville’s well-meaning intentions.
“You’re blaming the victim! Plus, there is no victim! The dogs wouldn’t be here if they weren’t enjoying themselves!”
Unable to counter such impeccable logic, Orville was forced to scrap the product.

Posted by LordSomber at 11:25 PM No comments:

The Discomfiture of a Landmark Obliterated 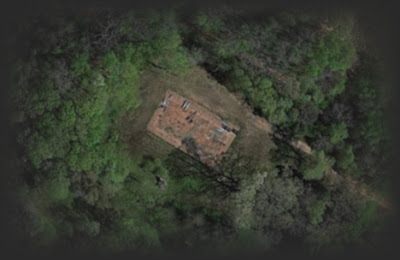 “Wiped from the map” would not be a literal description of the old lodge, as we can see, thanks to the ever-watching eyes of Skynet. But the sentiment is recognised just the same.

The foundation, caked in the dust of red clay, sits in a patchy clearing in woods not far from the wilted fairways of Brown Hills Golf Club. Rusted pipes jut from the buried substructure and there is still evidence of the Burning Pile once occupying the center of the yard.
Certainly some memories linger on in the hindbrain recesses of once-furley collegians.
Hearty laughs will no doubt abound in the retelling of tales about stockpiles of industrial-sized cans of foodstuffs, decades’ worth of men’s magazines stacked to the rafters, and a certain “lucky lady” who was stingy with her kisses. And of course, about the lodgemaster himself — Ol’ Man Willie and his domain of dog dirt.
Yes, there will be stories. And for a man with neither progeny nor estate, the laughs to be had between old college chums will be the sole legacy of he and his Augean Lodge.

Posted by LordSomber at 9:32 PM No comments: 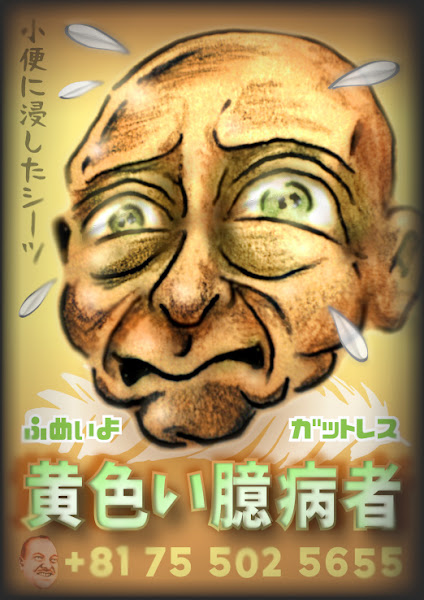 Posted by LordSomber at 12:15 AM No comments: 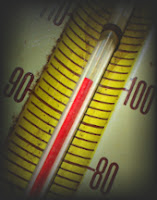 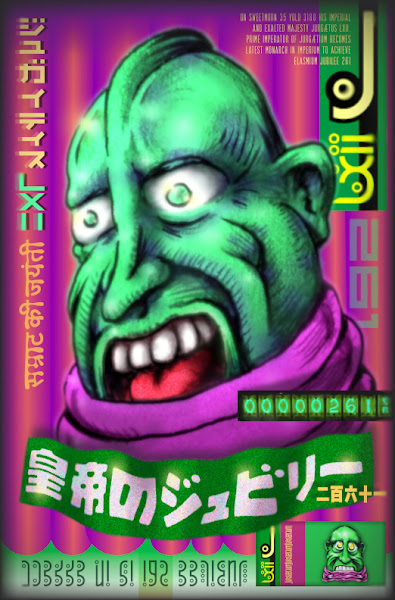 On Sweetmorn 35 YOLD 3188 (Earthtime: June, Stratum XLIX) His Imperial and Exalted Majesty Jurgætus LXII, Prime Imperator of Jurgætium becomes the latest monarch in the Imperium to achieve the Elasmium Jubilee — 261 orbits of reign and service. Large scale celebrations are scheduled planet-wide to take advantage of the respite from seasonal fractal storms.
The official celebration in the Imperium will begin with the Trouping of the Colour and Chendoga Guards Parade, concerts, street hoedowns, and pageants. Over seven billion people across the Imperium are expected to be joining the celebrations.
Seven colonial Prime Ministers will be in attendance as well as heads of state from United Planets members including Xarnaq IV, Serpo, Planet R, and Earth. Orville Corporation CEO Johnny Gutts was chosen to head the Earth delegation soon after UP Security Council dropped sanctions against Orville for alleged arms trafficking.
The Imperator will receive a long procession of diplomats and princelings at Jurga Hai Temple. The Imperator’s cavalcade will continue via Borne Litter through central Jurgæpolis and past the Grand Synod House of Jurgætium to Jurgætus Palace. He will then be wheeled in his throne to sit and watch the fireworks from Founders Garden.
Posted by LordSomber at 11:19 PM No comments: 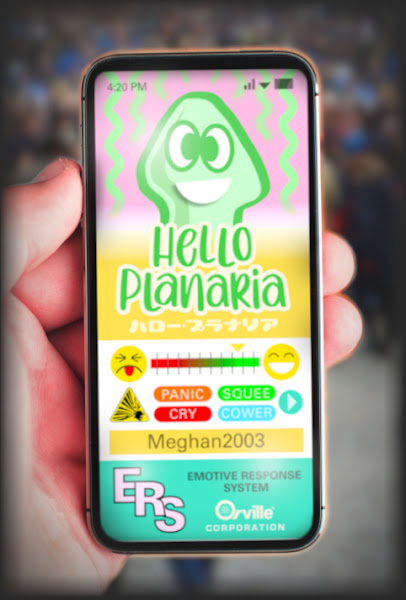 Hello Planaria™ is a digital psychological alert companion created by the Orville Corporation for their Emotive Response System’s public outreach services. Users can engage the app to recognise delicate social situations that many find triggering or overwhelming. The ability of Hello Planaria™ to detect Bad Vibes is paramount in a time when people’s common sense and social awareness are fettered by simultaneous connections to various digital realms.
The Hello Planaria™ coding framework is based on simple bio-forms that are naturally attuned to the sensitivities of their sphere of vitality. We have the lowly planaria flatworm to thank for this. Take a bow, little worm!
Programmers at ERS have fortified the worm’s extant nervous system and sensitivity genes and recoded its genome into a digital configuration to serve users on a human level.
Custom algorithms are optimised to detect an array of specific discomforts and other intrusions of reality. A sonic alert works via speaker or earbuds. Hello Planaria™ can be set to sense Stranger Danger, questioning glances, disapproving eyerolls, potential frenemies, and more! Hello Planaria™ will also kindly offer banal affirmations whilst in stand-by mode.
Rest assured that the technology inspired by a mere invertebrate is there to help you navigate reality.
Hello Planaria™ also works well in conjunction with individuals who are on The Spectrum. Available for download at finer app stores.
Posted by LordSomber at 3:36 PM No comments: