The Grit of Survival, Deferred 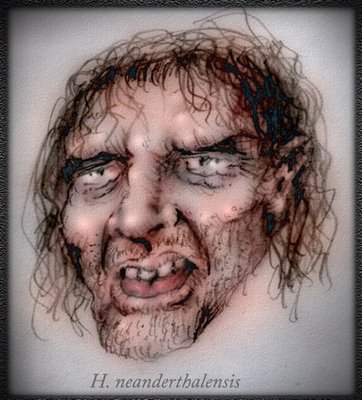 The disappearance of Homo neanderthalensis from the world has long been pondered and analysed by paleo- and anthro-scholars. Numerous theories have been posited, trying to shed light on why man’s closest relative vanished by 35,000BC. Many are merely the same old ideas with new twists -- turf wars with cro-mags, the inability to adapt linguistic toolkits -- you’ve heard them all. But the real reason in fact seems like a very new idea -- the twist being that it’s older than we could have ever imagined.
So what is it? What seemingly new concept is in fact an ancient one, one that led to the demise of our prehistoric brethren?

Neanderthals should never have gone vegan.

They did this, you must understand, not due to scarce resources or varied horticultural techniques, but simply as a “lifestyle choice.”
It uplifted them. Gave them self-esteem. Made them feel better than those oh-so-superior cro-mags with their big words and their fancy tools and their lame cave “art.”

Scientists believe that this was mankind’s first “fad” -- albeit a spiteful one that may have been the undoing for these haughty hominids. You see, fads are nothing but exo-psychic transactions meant for sub-caste motility and day-to-day social lubrication. They are not carried through evolutionary memory by Mr. DNA, thus they make poor guarantors for species survival.

And so, Neanderthal numbers dwindled over the next several millennia.
Though long gone, one can see remnants of their thought and behaviour among today’s trendy vegetarians... 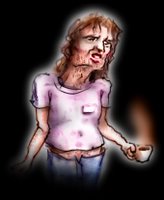 Half-asleep trudging around in the vegan establishment,
eyes that were once sharp enough to spot wily prey, now crooked, vacant...
hirsuteness no longer natural, but fey in its obeisance to local fashion dictums...
days of the hunter-gatherer past, his scrawny frame reflects the lack of red meat diet 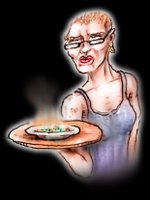 And his mate we see is worse for the wear.
Bone-thin, she has lost the supple curves of Willendorf.
Staid and pallid, her new Emo SmartGlasses™ do not quite seem to mask the fact that she is still, as ever, slack-jawed and slow on the uptake...

Declining fertility and species vigour on the wane: whence does this come? Standard youth-phase nostalgie de la boue? Rousseau’s noble savage gone indie? Or perhaps a deeper, darker nihilistic streak? Should someone have the answer, please notify this author, as his order-up tofurkey sandwich grows cold in the kitchen while neander-waitrons shuffle about, struggling in their prattle about Sticking It to the Man, Mojo Showboating, Testimonies of the Dust and Other Beguilements.
Posted by LordSomber at 5:23 PM