Hester Panim and the Blind Bacchae

Johnny Gutts is a man bound by his moral code. He was always a curious sort, never conscious of the spine that was already there. Questioning doctrines, ideologies, meta-memes — what have you. The quintessential Protestant Agnostic, wary of what lies beyond human ken.

A weight hangs — a deistic eye in the sky that looks back, whether proverbially, theologically or even evolutionarily — over one to do The Right Thing. Genetic mandates to preserve the soul, perhaps?

Atheism as an all-encompassing weltanschauung had already been tossed out by Mr. Gutts.
“Where is the sense of the ‘What if’?”
This ism’s own metaphysical certitude had cemented itself as yet another brand of ‘faith’ — albeit one with its own built-in dead end. Not that some atheists don‘t hew nobly to their own particular moral codes. But look at those many whom one would expect rational thinking, who instead volley forth uncritically into a froth over such vague yet in-vogue tropes as Foggy Envirotheism, Utopioid Rousseauan Hand-Holding and other secular antinomian harangues they foist upon the rest of us.
One belief/faith supplants another.
It is in man’s nature to have a god — God or no God.

Mr. Gutts had always appreciated the hedonistic aspect of every young lad’s lifestyle, especially while enjoying the salacious favours of one Miss Nichts. But in one instance the young lady reminisced freely about some debauched past deed, one that even the most irreverent and libertine would find cause to blush.
“Well, it doesn’t matter ‘cos I’m an atheist,” was her dismissive quip, cast with a hollow shrug.
The tone of voice, one with peccant glee, came across as throwing one’s palms up, waving away everyone and everything but the self. It gave Johnny pause, as her Faith in No Faith seemed to give her carte blanche for writing off both consequence and conscience.
Johnny Gutts thought long and deep.
“What a shallow life one must have if their raison d’être is predicated on what amounts to be an adolescent excuse...”

The Bacchantes found the pool of Narcissus and inward they gazed...
On the opposite bank sit Dionysus, Azathoth, Set and YHWH, quietly humming the melody of “El Mistater.”

Perhaps the gods have the last laugh.
Posted by LordSomber at 4:24 PM 1 comment:

"Are you ready for retail?" 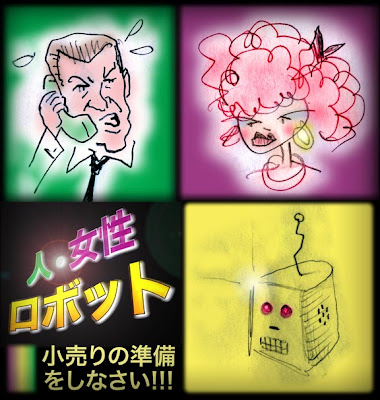 Posted by LordSomber at 6:05 PM No comments: