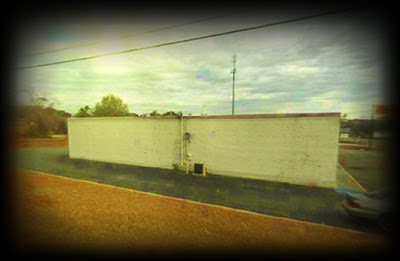 The cause of death, they say, was falling asleep at the wheel. Tragic as it was, it was not entirely a surprise as behind the vagabond mien was an easily distracted mind, yet one no less than brilliant. And so three compatriots of the deceased donned their finery and hopped in a junker to make the 5-hour trek to the memorial service.
That particular November day in the 32nd Stratum was unseasonably hot, as was evidenced when the engine overheated on the Interstate close to the Point of No Return.
On the shoulder the trio sat, loosening their neckties as the midday sun beat down relentlessly. Lester attempted mobile assistance while Stoddard and 8TG silently eyed the hissing steam climb from the car’s hood, the background a loud blur of whizzing traffic. Thirty minutes later the three, soaked in perspiration, climbed into the cramped cab of a wrecker with car in tow. They found themselves on the outskirts of the closest burg, a tired stretch of road named for some obscure Confederate general. It was a desolate landscape of body shops, pawn shops and signless concrete bunkers with iron bars over the windows unnecessarily emphasizing the obvious seediness. With the car in a service bay in a garage, the three fellows stood in the parking lot slowly sweating at the prospects. “When’s the funeral begin?”
“About an hour or so.”
“We’re still at least two hours away. What did the mechanic say?”
“He doesn’t know yet.” They stood silently in the sun assessing the reality of their predicament and in unspoken agreement came to the same conclusion:
‘WE JOURNEYED TO HONOR A FALLEN COMRADE. BUT WE ARE FETTERED BY OUR STRANDING IN THE ARMPIT OF CENTRAL GEORGIA. AND IT SUCKS GREATLY.’ In the heat, they sat miserably on a curb outside the garage smoking and muttering. The hours dragged on. Soaked clothing began to stick to skin.
“I tried calling a couple of different numbers but nobody’s picking up. The service must’ve already started. Oh, and the mechanic says the repair will take three days,” Lester said. Collective groan. They each passed the time mulling about the lot kicking pebbles or sitting pensively in the strip of dead grass beside the garage, staring at ants marching through the dust.
Stoddard broke the stifling silence. “Time for sustenance. There’s a DQ we passed a couple of blocks back…” Soleil + Cerveau = Séquence Surréaliste: 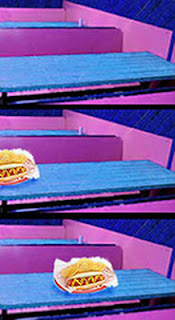 
Suffice to say, the three guys never made the funeral. The day waned, and eventually contact was made with associates returning from the service to pick them up on the way back home.
The day may have seemed like a wash, but it really wasn’t, and no one complained. Because even though being stuck in The Armpit of Central Georgia could be on the Bottom Shelf of experiences, the memory itself is seared in honor of one on the Top Shelf of gentlemen: ECW.
Posted by LordSomber at 3:30 PM No comments: Links to this post