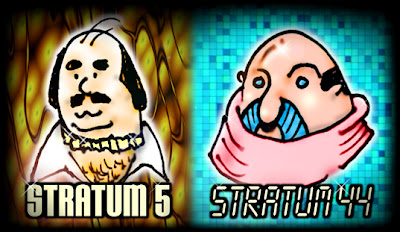 By Stratum 44:
• Machismo will be subjective.
• Yesterday’s Gold Chain is tomorrow’s Compliance Collet.
• In the future, everyone will be macho for fifteen minutes.
Posted by LordSomber at 9:42 AM 1 comment:

In observance of the Orville Corporation’s 30-year anniversary, a commemorative edition of the original Orville™ LabVac-2 will be re-issued as a limited-run series available in retail/wholesale and industrial/commercial markets.
The original LV-2 was the 10th Stratum successor to the LV-1, a failed tech demo with major design flaws:

[The LV-1 was a similar vacuum unit that featured a directional headlamp in the event of power failures. Unfortunately, since the unit relied solely on an external power source, a power failure would render the entire unit useless.]

The LV-2r features twin “waldo”-style removable telefactor arms for use manipulating the hose assembly and cleaning head.
But the standout feature of the LV-2r is the “boombox”-style console interface entertainment system. Updated and improved, the re-issue includes mp3/USB docks and a digital streaming receiver in addition to the “classic” AM/FM receiver and stereo cassette deck.
Headphone options are unnecessary as the audio signal is channeled through the vacuum’s impeller unit, so the vacuum/“boombox” twin decibel outputs operate as complements in tandem.
Back in its day, the LV-2 was very popular in the custodial engineering community. Orville™ is confident that the “face-lift” of the LV-2r will bring a smile to old pros while winning over new converts.

Posted by LordSomber at 5:18 PM No comments: 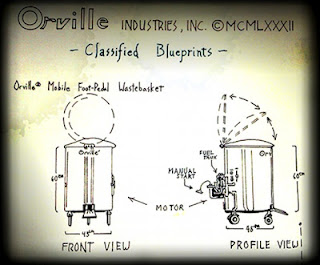 In observance of the Orville Corporation’s 30-year anniversary, a commemorative edition of the original Orville™ Mobile Motorised Wastebasket will be re-issued as a limited-run series available in retail/wholesale and industrial/commercial markets.
The MMW-1 was indeed a breakthrough in its day, and was a vanguard in applications in systems engineering and the sanitation arts.
The MMW-1 re-issue features a polished brass plaque with laser-engraved autographs of Johnny Gutts and the late Mark Hall, Orville’s own “brain trust” who both helped to catapult the corporation to unmatched success in wide-ranging fields using cutting-edge technology.
The MMW-1r is ideal for lab work, hazops, kitchens and nurseries alike.

Posted by LordSomber at 3:26 PM No comments: