A Quantum Walk Through the Arcade: Answering the Tachyonic AntiTelephone 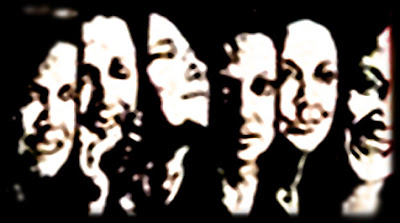 BIO-RITMO de DOS: A common device of the early strata, often found in emporium vestibules but mnemonically associated with the Echelon Facility. On the console displayed are date selector inputs and a posterised pentad of some chick’s changing moods. What is wrong with her?
To a curious 8-year-old, this apparatus looks like some sort of Hippie Computer. Or is it a Time Machine? Maybe the Big Kids know what it is.

Initial curiosity aside, the 8-year-old needed no epistemological epiphany to suss out the triviality of the contraption, for it sat amongst gumball machines and other frivolous bagatelles.
Actually, scratch that. He saw the mechanism’s meta-essence for what it was, regardless of its superfluous surroundings: This year’s Pet Rock. This year’s Leg Warmers. This year’s Ironic Mustache.
Everything that comes down the cultural pike is a constant déjà vu: Something chronologically new, yet simultaneously tired, old and boring. This is not mere jadedness. This is the Time Traveller from the future, with amnesia: He’s seen it all before, but it doesn’t register until he sees it again. The first time feels like the last time. A blind Möbius Roller Coaster with only a rear-view mirror.
If there is irony in this unfolding pageant, it is that a dime-store gadget offered to illustrate internally what the 8-year-old already unwittingly possessed externally: A leg-up on the Rhythm of Life.
Posted by LordSomber at 1:00 PM No comments: