Bad Medicine: Slipped Mickeys and the Albatross of Free Will 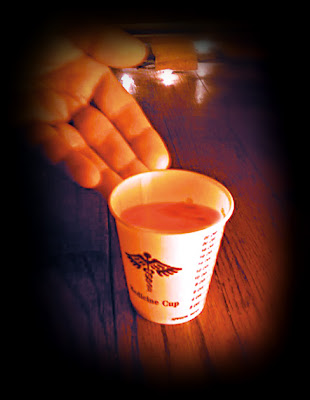 "Thank you, Classic City... Good Night!"
Ian Stoddard stepped down from the stage and waded through the crowd to the bar to grab a pint. He took a sip and surveyed the sea of heads and shoulders, searching.
"Where did she go?"
He snaked his way through the boisterous club, squinting in the hazy, low light at every niche and table.
And there she was.
Sprawled on a bench, slumped against the wall, her head skewed crookedly like a broken doll.
She stirred slightly, eyelids leaden, and softly moaned.
Ian stared daggers, and after a clenched number of seconds blurted, "What the hell happened to you?"

Veronique was an otherwise bright and witty woman -- 'fun to be around' as one might say. Though she did have a penchant for blathering boilerplate phrases in the form of "All ____ are potential _____;" "I'm against ___-ism, ___-ism and people who are ____-ist;" "____ is a social construct," and so on. You can fill in the blanks.
Ian chalked up her spouting of de rigueur tropes as a vestige of days at Uni. He endured this because she was Basically a Good Person. And hoping that eventually, being in the Real World, she would outgrow the parroting of her professors from Navel Gazing Studies classes.

What drives this mindset?
Intentionally putting oneself in a high-risk situation?
Having an external locus of control orientation? ['If I leap into a pool of sharks, it's still their fault for eating me.']
A cheap grasp at moral status through victimisation in the face of the cold, hard stare of Social Darwinism?

Ian took a deep breath, leaned close and hissed, "You're fond of pithy platitudes. Here's an old one for you that you've probably forgotten: Don't take sweets from strangers."
Posted by LordSomber at 1:49 PM No comments: