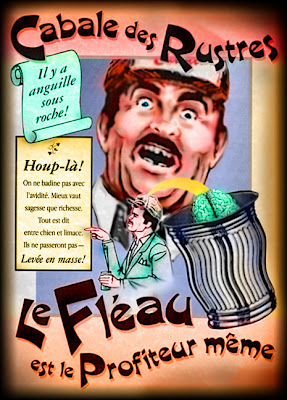 Posted by LordSomber at 12:57 PM No comments: 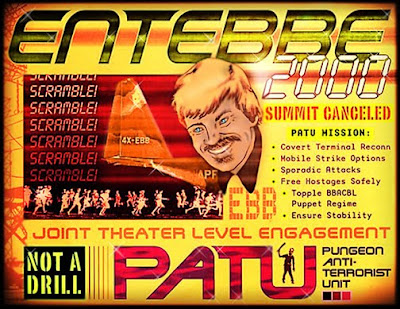 Posted by LordSomber at 12:32 PM No comments: 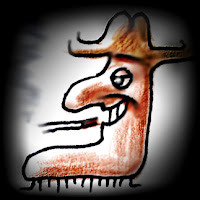 “Happy Jay from Chèvre Roulé”
A once-meaningless doodle ascribed the moniker by 5th Stratum cohorts; the appellation was later assigned to the new neighbour on the West Bank.

“Smiling Walt from Boomershine”
In umbrage the gentleman’s son launched a weak counter-effort, but the stunt failed to adhere in the community’s consciousness. 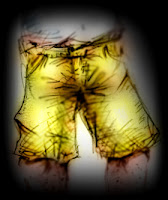 On the other hand, the “Happy Jay” meme gained traction. Even today, the nickname “Happy Jays” is widespread in the world of haute couture, referring to the trademark lemon-yellow culottes made famous by the gentleman on the West Bank.
Posted by LordSomber at 3:36 PM No comments: 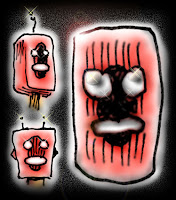 The standard No. 2 pencil was used to auger facial features in a basic elastic corrective implement common to pupils of the 4th and 5th Stratum. S’quatch imagery was prevalent in the overculture at the time. (Recall the young witness was eager to get home early from the Echelon Facility in time to view a transmission on the subject: “Gari ya Miunga”; also: “Gigantopithicine as Bionic Proxy”.)

Gass-Boy would sometimes brandish the totem at random and inopportune moments, often to comedic effect. On the corridor march to the mess hall, he once flashed the amulet to the acting custodian, an easy-going fellow who seemed to be “down” with things. The man was in fact a narco-informant, but had the horse sense to shrug off eccentric but harmless lads waving their makeshift idols in the air.

It seems even in youth there is the anthro-ethological tendency to recognise the power of the talisman, regardless of whether any actual significance has yet to be applied to its schema.

Posted by LordSomber at 12:40 PM No comments:

When It Rains, It Snowballs: The Maculate Reception 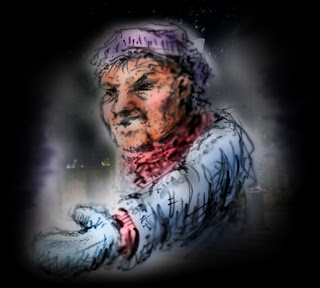 An all-too-obvious platitude we tell ourselves nowadays is that an excessive news media diet can gnaw at our minds, leaving a jaundiced, world-weary spirit.
Today was such a day for Travis.

Along the pavement he skulked, hands thrust in pockets, muttering about the incessant headlines.
“Protesters. Protesting how Life Is Unfair. Paedo scandals. Grown adults acting like children. Cultural coat-tailers. The fatuous gestures of the creatively bankrupt. The suffusing stink of ubiquitous nihilism. The filth and the rot and the fraud and the waste and the p!ss and the swill and the...”
Someone was having a bad day.
But oftentimes the ills of the modern world are topped off with a layer of the ridiculous.
So let us take Travis’s litany of wrongs, ball them up and plop it all down in one steaming heap of absurdity.

In his foul humour Travis made his way down the walkway where he found himself amidst a group of protesters. Protesting how Life Is Unfair. A gloved hand jutted out of the crowd, and out of polite reflex he shook it whilst trying to place the face.
“Travis! How you been?”
It was Mr Melton. Former co-worker, aging boomer. Convicted paedo. Hanging around a group young enough to be his grandkids. Reliving his lost youth in the most pathetic way imaginable.
“Hey, Lynn, look, it’s Travis,” he called over to his wife. [His wife was still with him?] 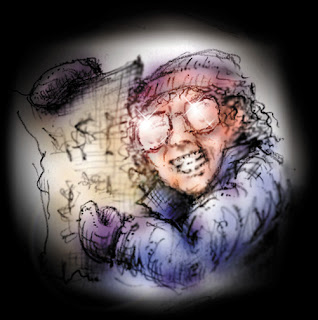 She barely looked over her shoulder as she was more entranced with shaking an illegible placard at passing traffic. Her faced beamed with the crazed grin of self-importance as headlights reflected in her eyeglasses.
“We’re having fun,” Melton smirked, trying to imply that this was all just a lark for them, not to be taken seriously. Somehow, that admission made the pair seem all the more sad and hollow.
The Nostalgioid Opiate is a strong pill indeed.
“Yeah... cool,” Travis mumbled weakly in response.
He stood dumbfounded at the scene, a seeming summation of the media miasma that had permeated ― nay, occupied ― his aching head.

Abruptly he drew away from the half-arsed conversation and crossed the street to get away from the crowd. He wiped his hand on his pants in visceral disgust.
Not only was his psyche suffering in consternation with Today’s Malaise, but now his physicality was sullied as well ― contamination by handshake.
Travis strode down the dark streets trying to shake off the taint of the encounter. But as he thought about it, he got a small chuckle at the odd confluence of events.
More often, we laugh not at the humourous, but the absurd and the inficete.
Still, he wanted a hot shower.

Posted by LordSomber at 12:30 PM No comments: