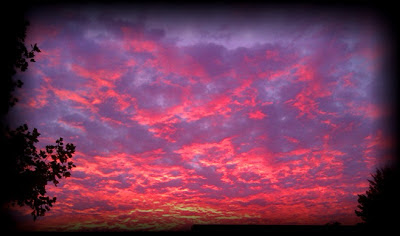 The ascendant Fifth Stratum iteration of a sunrise from beyond an ancient Spanish fort — known as Platinum Morning — has a little-known counterpart: Strontium Evening.
The sounds of Nightkill remain the Cue for this particular Vision as well, sung here instead by Hesperis rather than Eos Erigeneia in the original. Maturation of the volition was reached by the 12th Stratum when transmission of the song to the Bonus Chamber provided a fitting audio to the pre-existing visual.
The setting here though is more domestic than exotic: Rolling tracts of the East Bank, notes in the air of freshly mowed lawns mixing with hints of charcoal from righteous grill-outs and the intermittent crackle of UV bug zappers. All under a blazing scarlet canopy. And once again, above a tree-silhouetted sky, the arpeggiated major sevenths chime through the crimson ether, cycling their march in semidiapente, fading into night.
Posted by LordSomber at 1:54 PM No comments: