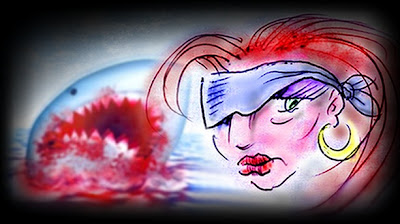 “Where the hell was it?
On Ponce, near the Kro-Zhay maybe. Walking from one place to another. The Clermont? The Concourse? Don’t remember, but it was after a gig or show. But it was on Ponce. Late. Dangerous, in other words. You do not stop and open your purse to the first lowlife who stumbles within ten feet of you. That man is not a kindly hobo looking for charity. He may swipe your bag. Or he might just stab you for no reason. Crazy, I know. But this is Ponce. Where Crazy lives. Your dripping mawkishness in the face of potential peril would have been your undoing, save for the fact that your man was walking with you. And the daggers he was staring at you and your damn fool stunt. Hope he gave you an earful...”


An uncomfortable pattern emerges:
• The Slipped Masque of LeVira.
• Veronique and the stranger’s candy.
• Jean Wecastor’s tolerance for codependency as well as consumption to the point of public incapacitation.
• And Elise, with her charitable chumming of the waters of Ponce. In each, an individual given to proclamation on the importance of “empowerment.”
In each, an individual irresponsibly willing to put themselves in unnecessary danger. Is there a psychological disconnect between therapeutic wishcasting and the inability to weigh risk? Willful blindness? Or a darker, self-destructive tendency in the subconscious?
Dunno. Freud would probably go to town though.
Ultimately, Montaigne had it right, regardless. As well as James and John.
Old words. But good words.
Posted by LordSomber at 7:22 PM No comments: