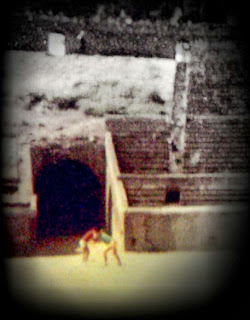 STRATVM XI: Seppo funsters channel the ancient luctatori of lore in boisterous form, clad in the meager armament of T-shirts and tube socks in loco at the timeless spectacula.
Grapple, dodge, square and drag.

Clouds of dust kicked up under the Neapolitan sun swirl around the tramping feet shuffling in the sand. Imaginary crowds roar and echo, baying for blood — a drop of which the arena has not seen since Antiquity. The souls of patrons and magisters Valgus and Porcius smile from beyond upon the combative spirit of youth, sparring sine ira.
Perhaps even exalted Mars himself nods in silent benediction.

Posted by LordSomber at 2:55 PM No comments: 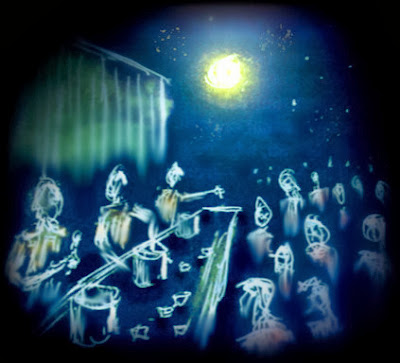 The nightfall fades to a velvet black as the attendants continue scooping under lone vanilla moonlight. They soldier on, reflexively avoiding flavour buddies by second sight, carving away under the firm, Kissinger-like direction of Mr Burr. The chimes of the Cue amplify the majesty and privilege of serving such Nectar of the Gods, regardless of recognition by the recipients.

I will be there.

Posted by LordSomber at 3:03 PM No comments:

Project Iota was a covert countermeasure proposed to Allied Pungeoning Front Director Johnny Gutts by Field Agent Ben Jantry back during the 25th Stratum. It was a bold and innovative idea that bore the hallmarks of PSYOP and CW (before Convention) in its potential as an effectual provocative.

The staging area was to be the Subject’s quarters aboard the S.S. Reverend Resbo whilst in port.

‘Weapon DF’: Via network, Agt. Jantry had procured a quantity of ‘decomp fluids’ of a type used in forensic training. Though the APF had an agent-in-place aboard the vessel (Young Merbos), Agt. Jantry offered to execute the operation himself.

Mission Scenario: At 2100 hours local time, the crew of the Rev. Resbo will still be on leave. Taking advantage of the piss-poor security BBACBL afforded the vessel, Agent will easily make way on board and access Subject’s quarters within a seven minute timeframe. Agent will then deploy DF in minute amounts to area undersurfaces — underneath pillows, blankets and cushions, and within articles of clothing. This is for the purpose of delaying recognition by Subject whilst the putrefying effects of DF progress. Agent will then vacate the quarters and vessel undetected under cover of night.
Total excursion timeframe: 17-18 minutes.
The moment Agent sets foot on the gangway Project Iota will be in effect.

Projected results: Subject will find nothing amiss the first 12 hours. Thereafter, a faint but increasing odor redolent of decay will be noticed. Within 24 hours the foetor will reach maximum pungency. Within Subject’s quarters and even following them around will be the stench of death. The rancid aroma of rotting roadkill. A billowing of pus and sulphurous muck suffusing the scene, emanating from… but where?
Psychological reactions will range from disgust to panic and should have a negative impact on Subject’s efficacy in fulfilling BBACBL duties. BBACBL crisis containment attempts will be futile. Alternate stateroom and uniform requisitions will not be possible as the vessel’s full complement and imbecilic QM will negate the option.

Projected outcome: Subject’s diminished morale and efficacy will amplify the perception of said Subject’s already-existing incompetence as well as hinder actual on-hand duties. Upper echelon BBACBL handlers will then have no other option for Subject than Rubber Room reassignment or termination.

Project Iota — Shelved/Scrubbed: Director Gutts deliberated upon the plan and was impressed, especially with the karmic aspects of this countermeasure. But considering that the Subject’s existing trajectory into ineptitude would inevitably torpedo all BBACBL operations anyway, Gutts scrubbed Iota whilst extracting the agent-in-place from S.S. Rev. Resbo.

Posted by LordSomber at 3:00 PM No comments: