Excerpt: Ponce and the Pauper 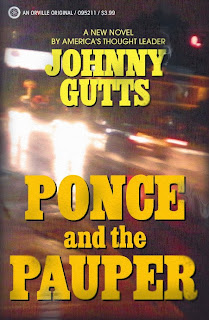 [W]alking down the dark, sketchy street, Ian noticed Elise was no longer by his side.
G–d damn.

He turned around and saw her off the footpath reaching into her purse. Facing her stood a shifty man in tattered clothes, staring at the purse like a vulture.
Slowly, but with purpose, Ian walked up to them with his eyes firmly affixed on the rotter and came to stand facing him without a blink.
Elise dropped some coins in the sod’s cupped hands, but Ian’s stare-down was enough to have the man back off and wander back into the darkness.

“What the hell do you think you were doing?”
“He said he needed change.”
“Do you know where we are?”
“What?!”
“This is Ponce. After dark.”
“He said he needed change.”
“This isn’t Woodlawn Avenue where you can hand out a tuppence to kindly pensioners. People are mugged, stabbed and raped here. Often. You cannot afford to be ignorant about putting yourself in danger.”
“But—”
“Shut up. There’s no argument.”

In silence they made their way to the Concourse.
From the corner of her eyes Elise peered at him with her nose in the air, waiting.

Without turning his head, Ian muttered, “For such a smart girl, you don’t even have the common sense to be contrite...”