C’est à rire: Just one of those days 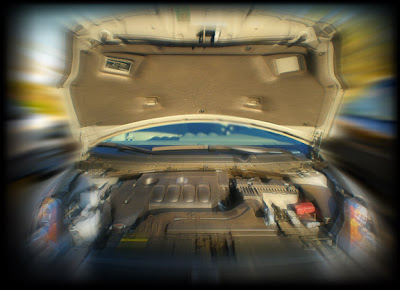 “Engine won’t start.”
“Spring open the bonnet, I’ll have a look. Try the ignition again.”
Seconds later the TAOMPV’s motor comes to life.
“Thanks, mate.”
“Not a problem,” says the mechanic, pulling his hands away, letting the bonnet clang shut.

Cruising down the motorway at a smooth 70 kph, Ian Stoddard notices a faint vibration coming from the van.
The bonnet is quivering.

Plant foot solidly on brake pedal without slamming it. Press it down firmly until it touches the floor. As you do that, pull over to the centre turning lane. There’s less of a chance of collision there than crossing over the two lanes to reach the hard shoulder.
The van comes to a full stop in the centre lane. Stoddard puffs out his cheeks and exhales sharply.
Time elapsed: eight seconds.

“My own fault,” surmises Ian. “Should have checked the bonnet myself to see that it had latched.”

As the van pulls up to the TAO offices, a greenish splatter of goo nails Ian’s arm.
“Jeez, that’s a first. Isn’t getting hit with bird dreck good luck in Italy or somewhere? Could’ve used the luck earlier. Or maybe I did.”

“That was the last job for today, Ian. You can take the rest of the day off,” said Miss Wood, the receptionist. “What’s wrong? You look shaken up,” she asked, cocking her head with a crease in her brow. She was the closest thing to a confidant at the office, but Stoddard wasn’t up to regaling her with white-knuckle tales of terror.
“Oh... nothing. Got bombed by a pigeon. Thanks, I’ll see you tomorrow.”

The house was quiet when Ian walked in. He took in a deep breath, paused, and blew it out slowly.
‘Wonder how the rabbits are doing,’ he thought as he opened the back door.
Two dogs spun around, caught unawares. The bottom of the hutch was ripped apart.
“What the--”
The mutts made a beeline for a gap in the hedges. Gone.
Left behind was the lifeless, mangled body of the white rabbit, pink eyes staring blankly up at the blue sky. Stoddard uttered a dry, point-blank curse. No sign of the brown rabbit. 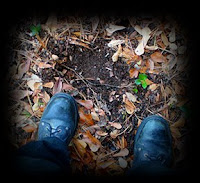 “Maybe he got away. I hope.”
He found a shovel and carved a shallow grave in the back corner of the yard.
‘Rabbits scare easily, right? Hope it was over and quick for her.’
Filling the hole, he was struck by the contrast of the soft, white fur, bit by bit, vanishing under the rich, dark soil. He finished the burial, leaving it unmarked, and walked back inside.
The sun was dipping below the trees but he didn’t feel like turning on the lights just yet. He stood before the picture window, hands on hips, and drew another deep breath through his nose. 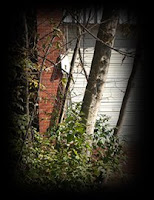 Across the street stood Professor Hubert’s bunker atelier. Some movement in the shrubbery caught Ian’s eye. A shabbily dressed fellow was trying to squeeze in through the loosely secured rolling doors.
“What next?” he muttered as he rung the authorities.
Coppers pull up scant seconds later, cautiously entering the same way. In no time they emerge holding the perp by his collar like some naughty cat caught with his paws in the fish tank.
“Dumb hobo, doesn’t even know what he’s looking for.”

Stoddard collapsed on the lounge, stretching his arms out, letting his head roll back upon the cushion. The weight of a boulder off the shoulders.
Silence.
*RING-RING*
*RING-RING*
Pupils edge to the eye’s corners shooting daggers at the phone. Another breath and he answered:
“Hello?”
“Ian Stoddard? This is Ms. Pierce from the Heritageville Courant-Ledger. How are you?”
“Getting by, thanks. You?”
“Great. I wanted to do an interview with you for an upcoming music edition this month.”
“Regarding which band? I’m in four or five at the current moment.”
“Oh, it’s not about your bands; it’s about you, the musician, being in all those bands.”
Humility kicks in with a waft of bland paranoia.

‘After today’s events, does one really need an ego trip?’ Stoddard grills himself.
‘Maybe. But all that has transpired is happenstance. How one deals with it is freewill.’
Complaints? Curses? Bewailment? An ego-soothing appearance on Oprah?
It is to laugh.

“No, but thank you, Ms. Pierce. I do appreciate the thought. Good day.”
Stoddard pushed himself back into the cushions, smiled wryly, and watched through the window as the sky turned from indigo to violet, and finally to black.
Posted by LordSomber at 6:48 PM