“Akhecvs!” — Of Freefall and Momentum 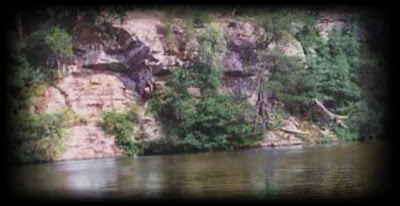 The pair of canoes set off from the foot of the lake’s spillway, coasting the still branch that ran alongside Timber Ridge. Under the bridge at Willeo the band paddled through the marshy estuary onto the main run of the ’Hooch. The sun dappled the copper waters ahead of them as the sound of cicadas whirred in the distance.
A brief break for refreshment at a shallow embankment resulted in a jovial mud fight between two bikini-clad girls, much to the mirth of the fellows who eyed approvingly.
Onward down the river to a granite outcropping where a rope swing hangs some ten metres overhead. After tying up the canoes, Ian, Jordan, Keith and the two girls clambered up the rocks through the trees to the swing. Everyone took turns amidst the laughing and howling, pitching themselves high into the air to plunge loudly into the cool current.
Ian was up. With both hands he gripped the thick rope above one of several large knots. With one foot he stepped into a small sling tied at the end. He took a breath and gazed over the gently burbling expanse of the ’Hooch. Hopping into the air, gravity drew the swing and passenger down a steep curve over the water with the wind whistling in his ears. The surface sped by below close enough to touch, and before the arc was completed, Ian’s leg slipped.
The foot sling gave way and ran up his leg to clench his inner thigh like a noose. By the time the swing met its apogee Ian was literally arse over tit, suspended ten metres over the middle of the river. Back the rope swung, dragging him head-first gasping through the water, out and up for his body to slam with a thud against the rocky wall. Back out again like a pendulum, dipping low, hitting the surface face-first, he gulped for air and grasped to free his loins from this inadvertent waterboarding. Repeat the cycle several times and the alternating dunking and slamming slows till his body loosens from its vice, dropping into the river like a lead sinker.
With a wounded groan, Ian tread to shore to be pulled in by his mates. Upon private examination, his back and shoulders seared with abrasions, and worse, his groin was swelling with purple-red rope burns.
“Gaah...” 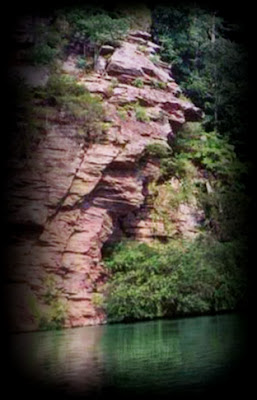 The crew pressed on down the river to the high escarpment of Huntcliffe. Keith jumped in to scout the waters for submerged logs and unseen debris. The crew scaled steep trails to arrive at a vantage from which they could stare even higher over the river to the marshes beyond and the dull green of the wooded horizon.
The fifteen metre acme of adrenaline was the group’s own Everest, au fond. And they stood in the high breeze facing west to take in the landscape baking under the sun. Anyone standing at any elevated height will attest that their perch appears twice as high looking down than being on the ground looking up. And it was no different peering down from a cliff.
Ian, still sore from his rope swing mishap, stood with toes curled over the rock's edge for a moment, silently gathering grit to make the leap.

“...For a jump from such a height, it is ideal to make the entry as vertical as possible — feet together, toes pointed, hands tight at one’s sides — or better yet, cupping the family jewels...” [Degree of Difficulty: Zwei-Punkt-Null... Hoden]

Ian swallowed and bounded out from the precipice, limbs held tightly together, casting himself into free space. Flight time probably measured a scant three-and-a-half seconds, but those seconds stretch into eternity as with any freefall.

Air resistance blasts upward peeling eyelids back and filling the ears with a roar. Linear momentum pries arms away from the plummeting body to rise and match the horizon. Time slows and weight grows, forcing a Christ pose upon impact, stinging all to hell. The murky sepia of the thick water braked the descent to a halt and Ian grasped his way to the surface. With his head popping up he loudly drew a lungful of the bracing air and tread his way to the riverbank.
Once again, a hike up the rocky incline under the cool shade of oaks to the high ledge. One by one, and sometimes two by two the guys made their leaps whilst the grinning girls sat by, eyeing approvingly. The sequence of climbing and jumping repeated throughout the humid afternoon with intermittent breaks for refreshment.
The day wore on and the adrenaline wore off. As he was catching his breath, Ian looked down at himself. On the underside of each arm was a black and blue stripe running from wrist to armpit. Old man always wanted me to go out for Diving Team. Told ’em I wasn’t cut out for it. Guess I was right. “Bruising due to repeated improper entries” he could imagine the judges announcing.
The worn crew got in their canoes and made their way up the ’Hooch back to the spillway before sundown. They went their separate ways and Ian, exhausted yet satisfied, hiked the half kilometre home amidst the smell of fresh-cut lawns and outdoor grills.
Changing out of his drenched clothes, he noticed that, in addition to a rope-burned crotch, scraped-up torso and thoroughly bruised arms, he had a wicked sunburn.
He slept well that night, nonetheless.

Johnny Gutts remarks from on high:

“Those inquisitive risks borne of adrenaline and the thirst for high adventure... once common rites for a lad; now, fading mainstays. Yea, for the price may be pain, pleasure, or a melange of both.
And maturity eventually tempers the physical dares with prudence, as it should, in parallel, with moral acts as well.
But please pray heed to the youthful exploits and the spirit that drove them, lest that torch grow too heavy. For that sort of hunger, in abstracto, is what drives us beyond, for better or worse.”

Posted by LordSomber at 3:28 PM