“Herr Doktor Ghoulsby wasn’t much for watching the dogs, being a busy man with his golf game and dentistry gig. Pets are for the kids, right...?”

Ruff and Reddy were a charming pair — a winsome beagle and friendly golden retriever. Sadly one day, Ruff — left outside unleashed — was struck dead by a passing automobile.
The good-natured Reddy remained, finding more companionship next door with the Benton brothers and cat Scamp than she ever found at home. At any given time one could find her in their garage nosing through the catbox for warm treats or simply “chilling out” in a less foul manner.
Unfortunately, Reddy almost met the same fate as Ruff. Likewise hit by a car, she was found by Mrs. Benton faltering and bleeding from her haunches. Wrapped in an old bedsheet, she was rushed to the veterinarian where her tail was deemed to be amputated. She lived on tailless, none for the worse.
The stained bedsheet mysteriously followed one of the young Bentons off to uni, which he used as a giant doodle pad to pass the time in between the daily study sesh. “The Sheet,” as it had come to be known, was soon filled with caricatures, vignettes and whatnot, much to the amusement of residents of Reed III, who would often inquisitively drop by requesting a viewing. An unintended gallery, as it were. Some favourite sketches were the S&M Wilma, Deity-Inventing Prof, and Neil ‘Deceit Has Run Amuck’ Rubble.
[Micro-memes accumulated up to and including the 13th Stratum.] 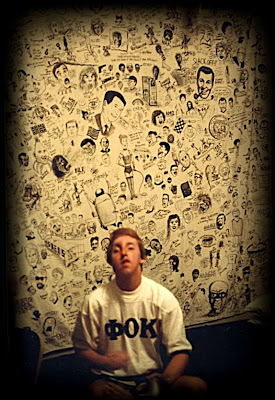 Images in ink, archived annals of a facetious flavour muster both laughter and puzzlement. But let that faded blotch in the corner give one pause — for the first “ink” to grace this spirited shroud was from a red dog... named Reddy.
Posted by LordSomber at 1:09 PM